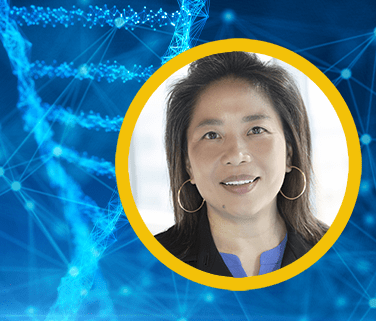 Margaret, a VP of Research at Amgen, is the second woman and the second chemist based in industry to be honored by the American Chemical Society and the Journal of Medicinal Chemistry.

When Margaret Chu-Moyer was still in high school, her natural curiosity started her down a road that would lead to a love of chemistry. "I'd see all these long scientific words on shampoo bottles or toothpaste tubes, and I wanted to know what they meant. Or I'd wonder why my fever would go away when I took aspirin. What was really going on? That's what fascinated me."

That same interest in the power that chemistry has to shape biology has driven Chu-Moyer's career for nearly three decades. It propelled her to her current role as a vice president in Amgen's Global Research organization, and more recently to one of her field's top honors—the Philip S. Portoghese Lectureship.

The medicinal chemistry community is actually quite small, so I knew some of the past recipients of the lectureship. It's nice to have more industry representation on the list, so I'm really pleased about that.
— Margaret Chu-Moyer, vice president Global Research

The lectureship is awarded jointly by the Medicinal Chemistry Division of the American Chemical Society (ACS) and the Journal of Medicinal Chemistry. Named for the journal's long-time editor, it recognizes individuals who have had a major impact on medicinal chemistry research. Chu-Moyer delivered the prestigious lecture on August 24, 2021, at the fall meeting of the ACS.

Chu-Moyer is the 11th recipient of the lectureship, the second woman, and the second chemist based in industry versus academia. "The medicinal chemistry community is actually quite small, so I knew some of the past recipients of the lectureship. It's nice to have more industry representation on the list, so I'm really pleased about that."

Chu-Moyer found her way into chemistry after a brief flirtation with a related field. "I initially thought I wanted to be a pharmacist, because that's where you go to get medicine, and I even volunteered at a pharmacy. But one day when I was counting pills, I realized this wasn't the career I was looking for. I wanted to know how the drug was working. No one had told me that was pharmacology, not pharmacy."

After finishing her undergraduate work at UC Berkeley, she spent a couple of years as a laboratory technician at Abbott to see if she enjoyed the daily work of medicinal chemists. She did, so she completed her formal education by getting a Ph.D. in organic chemistry from Yale. From there, it was on to Pfizer, where she stayed for 16 years, rising to the level of senior director.

"At the start of my career, the big challenge for me was 'How do we make these molecules?'" Chu Moyer recalls. "We still can't make everything we'd like to make, but now I'm much more interested in what we should make rather than how to do it. It's more about the design of the molecule and what different parts of the molecule need to look like in order to make a viable drug."

It's a two-fold challenge, she observed. "First, you need to noodle around with the structure of the compound to make it very specific for your target protein, so that it binds to the target you want but not everything else. Second, you need to ensure that the molecule's properties are pharmaceutically suitable." Suitability encompasses attributes like bioavailability, so the pill isn't too big, and stability to provide an adequate shelf life. You also want a compound that can be manufactured in a robust and environmentally friendly manner, and one that stays in the body long enough to facilitate daily dosing for patients.

Discover makes it sounds like we found something that was already there, but that's not the case. We're inventing new molecules that have never been known to exist before.
— Margaret Chu-Moyer, vice president Global Research

"Sometimes, it's harder to get the right pharmaceutical properties than right interaction with the target," Chu-Moyer observed. "When I started my career, we didn't have good assays to predict these attributes. If you tested the drug and it didn't work well, it was hard to figure out why it wasn't working. Was it because it didn't get absorbed from the stomach into the blood, or because it got metabolized too quickly? We just didn't know. Now we have more techniques we can use to characterize how a molecule needs to bind in its pocket and what we need to do to overcome imperfections and invent the right molecule."

Chu-Moyer has come to prefer that word invent over other often-used terms like identify or discover. "Discover makes it sounds like we found something that was already there, but that's not the case. We're inventing new molecules that have never been known to exist before. We're actually saying, 'This atom should go here and that atom should go over there,' and we understand exactly why the different atoms need to go where we put them."

In 2009, when Chu-Moyer departed Pfizer to work for Amgen, the move was a bit like stepping from one side of a yin-and-yang symbol to the other. On the one side, Pfizer had a long history in small molecules and was just starting to develop biologic therapies. On the other side, Amgen was a biotech pioneer that was seeking to expand into small molecules to pursue targets inside the cell that aren't accessible to large molecules. Each company had particular strengths arising from its core expertise, and Chu-Moyer welcomed the chance to marry these strengths by coming to Amgen.

"There was a very high structural biology mindset at Amgen," she observed. "The scientists here are world-class in using structure-based design to enhance drug potency. But when I arrived, Amgen was still learning how to build more drug-like properties into its small molecules. That was knowledge I could contribute."

Large molecules such as antibodies typically originate in humanized lab mice and are manufactured in living cells. "A molecule derived from an animal already comes with many of the properties needed to function well in a living system," Chu-Moyer observed. Scientists still need to identify and optimize the best antibodies to create the right medicine, but large molecules tend to start this journey closer to the finish line than chemical compounds.

"With small molecules, the hits you identify through screening usually need a hundred-fold or a thousand-fold improvements, so it's a lot of work," said Chu-Moyer. "There are hundreds of criteria that we are trying to maintain or improve, so it's a real balancing act to design and select the best overall molecule. Sometimes I'm amazed that we can actually arrive at a molecule that can meet the majority of our criteria."

In her Portoghese lecture, Chu-Moyer drew on Amgen's experience and lessons learned in designing a small molecule inhibitor of KRAS G12C, a hard-to-drug mutation found in several cancers.

"I talked about the importance of really understanding how you want to tinker with the protein target. I wanted to focus on that because, when I was a young medicinal chemist, it was all about the structure-and-activity relationship. 'Just show me the molecule, and I'll figure out how to make it more potent.' I didn't think enough about what the protein was actually doing, how it worked, and therefore mechanistically, how are you going to inhibit it. I think that's more important today because we have more tools in our box." 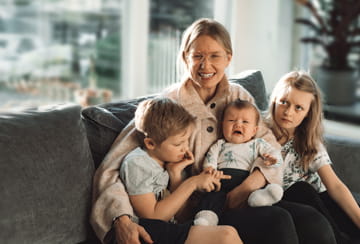